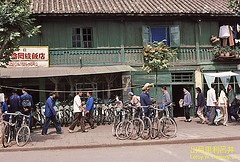 Read this interesting perspective at Urban Velo. Made me think about my own perspectives on riding and a few other areas.

…A friend of mine has been living in the United States for about nine months. Back in Japan, his primary form of transportation was a motorcycle, but since it would have been prohibitively expensive to bring a CB250 on the plane he was left with the options of bicycling, riding the bus, or walking. As a fellow member of the two-wheeled cult, he naturally threw a leg over his host-family’s loaner bike and headed for the college part of town. That was his first and last foray into bicycle transportation in America.

No, thankfully, he didn’t suffer any sort of gruesome injury, nor did he encounter any unusually aggressive road rage. Nonetheless, he quickly determined that the culture of the American roadways was completely devoid of courtesy. And as such, it would be nothing short of unsafe for him to use a bicycle, or even a motorcycle, for transportation during his stay…

Feel free to read the rest at Urban Velo, and probably consider just how much of life you might not be as sensitive towards given your culture’s allowances or dangers.