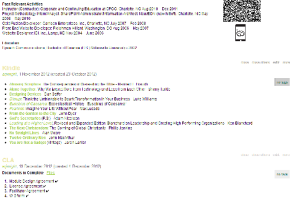 This wasn’t an intentional chapter into this thinking that there’s more to the web than the services that we subscribe to. But, then again, the hubbub about Instagram and their changing terms of service this week does fit within some of the points that I would like to make. So, let’s just start from the end of Part 1, and continue with why I feel things should change.

I’m in the midst of a few small projects. I have to call them small because these aren’t items that I’m being paid for at this juncture, but they are items that lead to compensation and opportunities down the line. And as such, I have to make notes, keep track of myself, and such. I’ve decided to go about this in a near-offline capacity with TiddlyWiki. As I’ve talked about here before, the ability to have a digital notebook, that sits on my mobile device, that I can access from any of my other devices, minus the fact that I can’t edit it on all of those, is appealing to me. I feel a decent sense of control about it – and a little bit of fear. I’ve had my moment this year of losing this stuff and building it back up slowly.

At the same time that I’m working on these projects, the ideas and implementations of Dave Winer’s River 2 have really intrigued me. I can’t build to the depth that he builds things. I can put pieces together and come up with nearly manageable things that work (Dropbox hosting a page that uses a RSS to JavaScript hack and an image with magic from Layar is a nice homepage-meal because it works for me quite well). But I get it, there’s part of this web that’s really meant to be tinkered with. A lot more than what we normally see in our daily interactions. And the freedom and cycles that make this web interesting will keep happening. I can’t help but think like Winer and others though that we’ve got to take a better hold of what we put into this space, and what it produces when we aren’t in the midst of these screens.

So today, as I work on a curriculum for a class that I hope to teach, I’m provoked to fix and tweak a resume document format that I’ve been using for the better part of 6 years or so. I also took a look back at my options for moving to a mobile platform that would allow me the ability to edit this notebook when I’m on the mobile device – perhaps with the help of a developer or two to make a wiki. And then there was that tweak to the Bible UI that I started nearly a year ago. That was one of the many things lost a few months ago, and I’ve not gotten back to the state it was in due to content issues. I’m at the liberty of whatever moves me to create in this space, and then make life livable on the screen and well beyond it.

I have this feeling that if I could program a few workflows, that I’d never use Twitter, Pinterest, WordPress, and several other services again. I’d do a lot less typing (online) and a lot more living between the text, pics, and video. That’s kind of what I think about when I see these web services and the pitter-patter of feet to them. There’s more to life than this – and we owe it not only to ourselves, but to those who will want to use this long after we log off, to do something just a bit more. If I were a web service (which is what I aim to be when this is all said and done), that screenshot becomes all that remains of 2.0 thinking/acting.