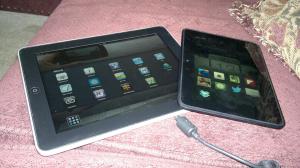 I guess this should be considered as a Part 3 to my look at the Kindle Fire HD (Part 1, Part 2). It has become my primary tablet computer (for better and worse), and there are some interesting ways that its already presented itself as different than my iPad. This time around, I want to talk more about interacting with the device and some of what I do/don’t do with each and what these strengths and weaknesses are. In a technical sense, I’m going compare the user interface (UI) and the user experience (UX) of these two tablets. I feel that both take a different – and necessarily so – perspective on computing on something a touch larger than a smartphone (the Galaxy Note II would make for another entrant in this discussion, if I had one).

First impressions of a device are interesting, because in many respects, that becomes the filter to which you end up viewing just about everything else. Sometimes, that filter is good, because its something that the designer paid attention enough towards so that you end up with some kind of guide as to how to continue with things once the new-device-shine has worn off. And then there are moments where that filter is bad because it ends up constraining how you work with devices and services, such that no matter what you might see from another’s refactoring of the definition, you always end up back where you come from.

That’s where this comparison of the UI/UX for the iPad and Kindle Fire HD starts from. What did the designer want for you, versus what will you end up wanting for yourself? Its not a hard question, but it is one that many reviews miss out on for the sake of making the judging field equal.

The iPad is a canvas. One could even argue that its a $500+ blank canvas. Out of the box, the most functional applications are the browser, the email client, and the PIM applications (contacts, calendar, and notes). And if you were thinking, “hey, there’s not much more that I’d like to do with a tablet than browse the web, read a few emails, and keep note of some items from time to time,” then the base iPad is perfect. However that base does come with a way out… a door if you will – the App Store. With the App Store, the iPad goes from this out-of-the-box dull canvas, into something that’s quite personalized. A screen for apps to do work, a screen for games, a screen for entertainment apps, a screen for kids stuff, etc. Over time, the iPad becomes worn more like a piece of canvas that continually gets painted on, for the sake of (several) personalized computing experiences.

The Kindle Fire HD is a catalogue. And like the Sears, JC Penny, and even Yellow Page books that used to line the bottom of the bookcase (or prop-up one of the smaller members of the family at the dinner table), it plays a role not so much to let you do anything with it, but to show to you a curated sense of computing that is useful for show, work, and play. Opening the Kindle Fire HD and inputting your Amazon credentials, you are shown a menu and then a screen full of enlarged book icons. There are no backgrounds to customize, no menus to rename or trim, you pretty much get the interaction experience as dictated by Amazon, but fueled by what you begin to do inside of that sphere. And like any good catalogue, the very first icon on the menu is Shop (followed by Games, Apps, Books, Music, Videos, and the rest).

The Kindle Fire HD therefore doesn’t age in the same way that the iPad does. Where there are screens to slide through on the iPad, the sliding action on the KF-HD happens with the apps themselves. The apps aren’t arranged in the way you want them either. The listing is a most-recently-used carousel list (scroll to the right to see the older), and depending on the icon in focus, you are shown either recommended applications (from the Store) or recommended actions (for the PIM apps).

So far, I like the KF-HD’s method of displaying content and the computing canvas a bit better. While I could go without the app recommendations, getting the trending websites and action recommendations makes a lot of sense. The iPad wins on account of navigating – its use of gestures to pan through screens, or the multi-finger gestures to pull up the most-recently-used apps listing from any app is definitely more convenient. Of this latter action, the KF-HD has an action bar that has to be tapped at bottom or side (landscape) of the screen, and then you can either click to go to the home carousel or the star to pull up your list of favorite apps. If the KF-HD did this with thumb/single-finger gestures instead, it would easily be a better paradigm for the size of device (here’s where I mention that the BlackBerry Playbook got this completely correct).

In the next parts of this comparison, I’ll talk about the idea of a task based UI versus a time/preference-based one, and then how input and sharing adds and takes away from the overall UX.