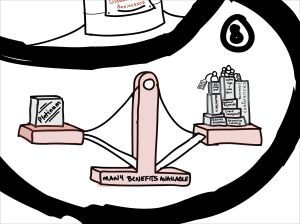 I’m just wrapping up doing a contracted sketchnote and I just wanted to meander on thoughts for a bit since its been a while since writing. If you will, there’s been a bit of a relearning about myself that’s been happening due to these – and some other images happening around me.

Of note, the opportunity for the contracted sketchnote came because I was invited to expose myself to a group of people whom I rarely would find myself around. Nothing against them, but we all do some bit of filtering our selections of people when it comes to networking. To gain this opportunity, I attended an event, drew some impressions, and the person running the event cam across that image and asked for my sketches to grace another project for them. Ironically, the image in this post is the one part of that image that was asked to be changed. I learned to let open that networking funnel a bit more than I normally would.

The sketchnote will be describing the coming together of a few groups. Groups of which I’m not all that familiar, but both groups will be sitting on a presentation with one another, using my images as a means to further their connection to one another. Its kind of a powerful thought when I think about it like that. Words and pictures that pull together disparate groups – kind of neat.

You learn a good bit from these moments. I (re)learned about what to charge for work like this. I learned about the time it takes to make something like this happen – and its nothing like the “draw on command” stuff that I was getting in college. I learned about the tendency for people to want something graphical, but not always know how to explain it without some kind of leading. And on the other end how you can’t assume that the entire picture would be grasped if they don’t see it (doh). Simple is complicated, complicated is easy. Designing for the end experience is the kind of simple that is most appreciated.

I relearned about that whole love of desktop applications (I don’t love them), and how much presentations would be easier if we could think less like a ruler, and more like a canvas. I wonder what this sketchnote would have looked like as a Prezi – or if I finished my zoomable S5 slide deck. Then again, with that hearing of Evernote purchasing Penultimate, I might just have a means of combining several document types – doing even more fun stuff with sketched, linked, and searchable content points.

The person who asked me to do this seemed to have some assumption that I knew what I could do here. I don’t. Seeing strange content and composing a picture that knits it together is as much a challenge as it is to do taxes (!!) or drive sane in the rain (!!!). At the same time, when I get that image, it all kind of just flows. I’d be good to learn how to get into that space a bit more often. Seems like I could not just be a lot more productive, but I could actually enjoy what comes from the ends of these fingers.

If you’d like to see sketchnotes I’ve created, the gallery is here (via Dropbox). To contract me for doing a sketchnote for your meeting, workshop, or conference, please use any of the social media channels on my landing page to get in contact w/me.