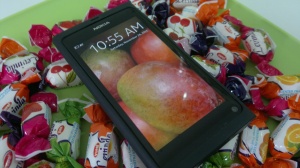 Three articles, two moments, one point of clarity. Your mobile isn’t satisfying, and it’s because of the folks who lead in mobile it pushing enough. But, when they do speak, the warts are more noticeable than the quirks.

The first comes because of matter of perspective. You see, anyone that had a smartphone prior to 2007 would understand this. Anyone who is new to this world, well, they won’t. Polish isn’t an innovation. Those who are new to smartphones receive it as if it is. Shame really…

Technology moves forward at breakneck speeds, showing us things on a daily basis that we never dreamed to be possible before. Why, then, are we still buying mobile devices that are just good enough? Why has the desire for something new or different outweighed the necessity to be amazed? Whatever the reason, it’s strike 3, and we’re out of the game until we stop accepting mediocrity.

That is the opinion of someone who should have pushed. They should have had that N95 or Treo in their pocket and accepted nothing less than features and efficiency perfection. And the iPhone is close, don’t get me wrong. It’s just polish on the parts already done well. It’s not yet forward enough to be anything more than mediocre.

But, there are glimpses of where things are pushing a bit. Just a bit though, we don’t get to run out of that mediocre plane for very long. It’s either heavenly…

The first Nokia device, in 2 years, that made me wake up at 5am the next day to play with it

I received the Nokia N9 at 8pm on Thursday and even though I took my time to set it up and get used to it before sleeping, I was still giddy with enthusiasm and a little bit of intrigue, that I woke up at 5am on Friday to continue tinkering with it. I call it like it is, and no Nokia phone has made me do this since the Nokia N900. Not the N97 mini, X6, C5, E5, E72, N8, C7, E7 or E6. They were all the same’ol thing I was used to, in Symbian, so there wasn’t any real excitement when I received them. The N9, well, it’s different, and it makes you want to play with it.

The wonderful display that isn’t

As I mentioned in yesterday’s post, I barely knew anything about the N9 before trialling it, but the one constant I saw in many online comments was that the screen was awesome. Imagine my jaw drop in horrified disappointment when I turned it on for the first time and could see everything slightly blurred and pixelated. I tried to track down the display resolution settings (which do not exist, obviously), then I asked the question on Twitter, only to be told the screen technology is Pentile. I will not bore you with tech details but suffice it to say, if you have slightly poor vision, you won’t see a thing and it’ll be crisp and wonderful for you. But if you have good/great vision, you’re in for the most magnificent disappointment of your geeky life. Everything looks blurred out, you can count every pixel, and anything white on a black background shows with purple edges on the left and green edges on the right.

So, now the chorus is resounding in near-unison that mobiles just aren’t pushing the future envelop far enough. Part of that has to be because of the maturity of the industry (you don’t take risks to keep market presence). And another part of that is certainly the heavy English, affluent, USAmerican, and money-following voices brokering what is good and what isn’t.

Heaven forbid we actually get challenged with living with these mobiles to the disdain or acclaim we ascribe to them. Who knows the actual changes we’d be able to incite.

3 thoughts on “Why Your Mobile Isn’t Satisfying”